Symptoms at Diagnosis: Bleeding when going to the toilet, abdominal pain and urgency

My name is Scott Moore, I was born on August 23rd 1991 in the small English town of Okehampton. My journey with IBD began little over a year ago. I first started to notice symptoms just before my 28th birthday. At first it was just a small amount of blood but over the course of a few weeks it began to get noticeably heavier.

I contacted my doctors straight away and at first they thought it might have been haemorrhoids. This went on for several months, various appointments with different doctors, each doing the same tests and saying the same thing, while I watched my symptoms getting worse every day. The bleeding was getting heavier, my stomach was beginning to hurt, I was having increased urgency to use the toilet and I knew it was something more serious than haemorrhoids.

After months and months of appointments, phone calls, pushing the doctors and spending whole days in A&E I finally got an appointment for a colonoscopy in February 2020. However, I knew I needed to be seen sooner than that so with a bit more pushing I had it moved forward to November 2019.

"I was diagnosed with severe ulcerative colitis and since then my entire life has changed."

I was diagnosed with severe ulcerative colitis and since then my entire life has changed. Initially I handled the diagnosis well and didn't think it was much to worry about. I was given eight weeks worth of steroids and within days I was feeling great! This lasted for about two months before I started noticing symptoms again.

I spent the next eight months taking mesalazine suppositories and different enemas but nothing seemed to work. I'd have the odd week where I was ok and then a month of mild symptoms and was never really able to get it fully under control. I kept food diaries, identified triggers, reduced stress, consumed probiotic foods but still couldn't reach full remission.

Over this past last month (Sep / Oct 2020) I entered into the worst flare I have ever been in. My specialist put me back on steroids again only this time they didn't work. So after another colonoscopy they put me on a new medication called tofacitinib and I am currently waiting to see if it will work for me.

“I would advise EVERYONE with IBD to reach out to others who have it or have been affected by it.”

I've tried to educate myself as much as I can since being diagnosed and I'm still learning so much, but one thing that has really helped me manage my IBD is the community that comes with it! I would advise EVERYONE with IBD to reach out to others who have it or have been affected by it.

There are so many helpful people out there sharing their stories, experiences and advice. It's inspiring and that is what led me to create my IBD workouts page. I wanted to see how I could give back to the community, what I had to offer, how I could help and I believe that is through sharing my story and the strategies I use in regards to exercising with IBD.

“You're going to get good and bad days but IBD doesn't have to ruin your life.”

I can't change the fact I have IBD, it's part of me now but I won't accept it affecting my life in a negative way. You're going to get good and bad days but IBD doesn't have to ruin your life.

Thanks for checking out my story and if you'd like to follow more of my journey and learn some tips on how to exercise with IBD, then you can find me on Instagram at @ibdworkouts. 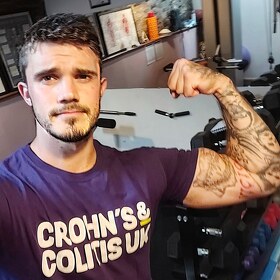 Hi, I'm Scott Moore. I was diagnosed with severe ulcerative colitis in 2019.

Article What is having a colonoscopy like?
Article What to expect from ulcerative colitis