Symptoms at Diagnosis: Abdominal pain, accidents and bleeding when emptying bowels up to 30 times a day.

I was diagnosed with acute severe ulcerative colitis in July 2017 and my IBD journey has been a roller-coaster. I went into hospital unwell thinking I'd walk out with the treatment I needed and never could have imagined what was ahead of me.  At the end of April 2017, my chronic constipation from IBS switched to urgency, accidents, regular toilet visits, blood on wiping and in the loo and abdominal pain.  My symptoms got that severe I ended up being admitted into hospital where I received my diagnosis. This was my first flare and a major one. It was diagnosed as acute severe ulcerative colitis impacting my whole colon and rectum. I was bleeding up to 30 times a day feeling like my insides were being ripped out. The toilet looked like a massacre and the pain was horrendous.

I was treated as an urgent case once diagnosed because my bowels were close to perforating. When admitted into hospital I was started on mesalazine, hydrocortisone and 40mg prednisone. This didn't alter my symptoms, so I was started on infliximab two days after diagnosis. Treatment wasn’t improving my symptoms and every day in hospital I was getting weaker.  Being on death’s door is scary for anyone, but to then find out you need to have life changing stoma surgery (in the same week as diagnosis) was soul destroying.

I have spoken to many people with stomas and they are shocked to hear my story. The majority of IBD patients I’ve spoken to appear to have time to process everything because they can go through years fighting their disease before they decide a stoma is the best option for them.

After having my stoma things did not improve, I kept on being admitted back into hospital with complications, which led to more emergency surgery and sepsis three weeks later. I had a twisted bowel, burst wound and sepsis. I honestly felt like my world was ending and I was suicidal for the first six months. My complications (severe bowel obstructions) continued so it was decided to have two further surgeries to create a J-pouch, and during these surgeries I needed a blood transfusion, suffered kidney damage and had numerous infections throughout my recovery with my stoma hole taking six months to fully heal.  It felt never ending but I held onto the hope that I would have a normal life back afterwards.

I still suffer with issues caused by my IBD but my suffering isn't as bad as it was three years ago. Along with my IBD, I also have depression, anxiety and chronic fatigue syndrome plus some other linked conditions such as migraines. My chronic fatigue syndrome is what I suffer with the most these days and it was diagnosed as a result of the trauma I suffered from my IBD between July 2017 and July 2018.

Coming to terms with my stoma was one of the hardest mental fights I've fought but I'm so thankful I overcame those dark days. After accepting my stoma, I decided to do a photoshoot with my bag on show and with words written over my body that linked to my IBD fight. Doing this shoot was so empowering and by sharing it, I became a role model to those in a similar situation whether it was pre or post stoma surgery.  I showed them that they could still be strong and beautiful. I also did a similar one after my J-pouch surgery showing my scars, which had the same impact.

“Coming to terms with my stoma was one of the hardest mental fights I've fought but I'm so thankful I overcame those dark days.”

Because of the impact from my previous photoshoots, I held a group one at the start of 2020 to help empower others that feel negativity on a daily basis, whether through illness, being bullied or how they feel they are viewed by others. The photoshoot received amazing feedback and support, so I have other photoshoots planned which I’m aiming to turn into an awareness calendar.

I started taking part in pageants last year (making the most of my good days) to show that everyone can be seen as beautiful. I competed in February 2020 for the chance to go to America and although I didn't win, I'm proud of myself for what I achieved.  Despite it being a tough competition, I came second in the role model category and third in my age division, which I’m immensely proud of. I've decided to focus on improving my weaknesses and I aim to go back in 2021 to achieve my dream title of Royal International Ms United Kingdom UK. Pageants have really helped build my confidence and given me a sense of purpose in my life, after having to give up my successful career as a mortgage learning and development consultant.

I focus my time and energy on raising awareness of invisible illnesses and disabilities based on the discrimination myself and many others have received. This is with the aim to hopefully one day END discrimination.  I've raised over £2000 for charities since I started fundraising and I’m planning a big event, a Warrior Charity Pageant, for next year, Covid allowing! This event will be the very first charity pageant I’ve run and it has a twist to the normal ones. All those taking part have a form of invisible illness or disability.  Through the pageant I hope to raise awareness of the participants and also empower them. All money raised is being donated to the charities that support us and it is due to raise over £1000.

I released some merchandise and posters as part of my goal to end discrimination, showing what could be hidden underneath a 'normal' appearance and I'm attempting to get these seen worldwide with the help of others through my projects. I have a website www.makingtheinvisiblevisible.org.uk and Facebook page 'Making The Invisible Visible' with all profits from sales going to charity. Along with this I run a private support group, and I have put together a training programme for workplaces and schools to help educate them once it is safe to do so.

“Although my good health today is a roller-coaster, I do not let my illnesses define me!”

Although my good health today is a roller-coaster, I do not let my illnesses define me! I try to enjoy my good days and focus on changing people's perceptions of 'disabled' whilst also helping others. If I change one person's mindset, I have made a difference and that's what I love about what I do. Getting diagnosed with a lifelong illness comes as a shock and impacts you mentally as well as physically. We do not choose to have the struggles we have so it makes it harder to accept when we have to deal with discrimination. 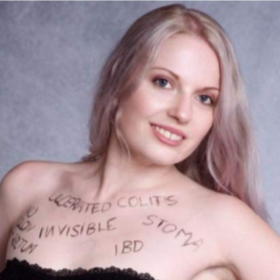 I was diagnosed with acute severe ulcerative colitis in July 2017 and my IBD journey has been a roller-coaster. I now focus my time and energy on raising awareness of invisible illnesses and disabilities.