Details of Surgery: None.

I’ve lived with ulcerative colitis (UC) for 10 plus years now and it is something that has changed so many aspects of my life. From the visible changes such as medications and hospital trips through to the invisible aspects, the scoping out where the nearest toilet is wherever I go and the anxiety if I can’t see one. While it’s something that I have learned to live with over time, it still has an impact on me daily.

My symptoms started in my first year at university, I was going to the toilet more often and more urgently each day and beginning to see blood in the toilet bowl. Like any sensible person would, I stuck my head in the sand, ignored these very visible signs that something was wrong and pretended like everything was normal. But running to the toilet 20+ times a day and leaving lectures multiple times to find a bathroom was impossible to ignore for too long and eventually I did book myself in to see the university GP. Not wanting to admit that I’d ignored such obvious symptoms, I downplayed how long this had been going on to the GP and so they advised me I’d probably got food poisoning from a dodgy takeaway but to come back if things persisted for another week. It was when I came back a week later feeling even worse that the GP first told me I likely had ulcerative colitis.

Dealing with UC through the rest of university was a challenge as while steroids would give me a short respite from the disease once I tapered off them, I was quite quickly back to running to the bathroom at a moment's notice. I ended up missing a full term of university due to being too unwell to sit through an hour-long lecture or seminar. One important thing I learned though was to ask for help when it’s needed, once I actually told the university about my UC they were able to help in small ways like having me sit in a separate room for exams so I had easy access to a bathroom. And while being newly diagnosed with UC made life a challenge, I also still had a fantastic time at university, I may have had to miss out on the odd night out but in the periods I was feeling better I made sure to enjoy it with friends.

“I’ve had periods of taking 20+ pills a day, had weekly injections, been screened for several clinical trials without ever making the cut to take part and had more blood tests, stool tests and colonoscopies than I’d wish on anyone.”

From being diagnosed up until now, I am yet to find a combination of medicines that keeps me in remission for more than a few months, and even when I’m in what I’ve called remission it probably still wouldn’t be what most people would call normal. I’ve had periods of taking 20+ pills a day, had weekly injections, been screened for several clinical trials without ever making the cut to take part and had more blood tests, stool tests and colonoscopies than I’d wish on anyone.

I paid to speak to a nutritionist 2 years into having been diagnosed with UC and their advice could basically be summed up as “I don’t know what to suggest, are you getting enough vegetables?”. This experience was really frustrating and turned me off looking at any holistic approaches to my health, and led to me putting all my faith in the idea that a combination of medicines at some point will be the answer for me. It’s only now, another 8 years later, that I’m seriously looking at ALL the things that can impact my health and trying to take a wider approach to improving my UC, because if making some small changes to my diet or exercise could make a difference it’s got to be worth trying.

Living with ulcerative colitis is a challenge, it affects so many aspects of life both big and small, from planning journeys based on where there are toilets through to choosing accommodation based on the number of toilets in the house. But over time a lot of this becomes second nature and I’ve learned to find ways which mean it doesn’t feel like I have to miss out on too much. I’ve been lucky to work for companies who have allowed me to flex my hours and travel at times where there’s less traffic and to work from home when I need to. I have great friends who know that when I say I need to find a toilet quickly they understand the urgency and don’t make me feel conscious of it. I have an amazing girlfriend who is super supportive and has even jumped into trying a gluten free and dairy free diet with me - although alcohol free was a step too far!

“While it’s early days on taking a more holistic approach to my health I’m hopeful it’s a step in the right direction.”

My real hope for the future is to get to a place where I don’t need to plan every trip based on where the nearest toilet is, to be able to just say yes to plans without having searched Google maps for anywhere that might have a bathroom. While it’s early days on taking a more holistic approach to my health I’m hopeful it’s a step in the right direction. 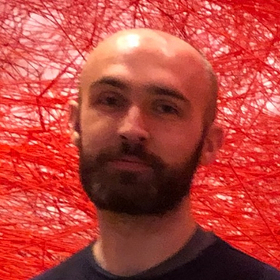 Hi, I'm Jordan. I was diagnosed with ulcerative colitis in 2010 whilst at university.

Article Living with IBD at university
Article University top tips
Article How to survive a colonoscopy
Article Just been diagnosed with ulcerative colitis?