Details of Surgery: Incision and drainage of perianal abscess

I first started showing symptoms of inflammatory bowel disease (IBD) in March 2021 where I would have extreme urgency to go to the toilet and all I would let out was blood and mucus. I’ve always had a nervous stomach and was under a tremendous amount of stress at work, so I ignored the symptoms for a few months. It had gotten to the point where I was running to the bathroom 10-15 times a day and the amount of blood was starting to scare me, so I decided to reach out to my primary care physician (PCP) in July. I think part of me was embarrassed because well…it's poop. And talking about bathroom habits with a doctor was never something I had discussed prior, so I wasn’t sure how to go about it.

In the height of COVID, I had to schedule a telehealth appointment with her but as soon as I told her my symptoms, she immediately referred me to a gastroenterologist for an urgent visit. After a [not-so-pleasant] rectal exam, I was told I had left sided ulcerative colitis but had to go in for a colonoscopy to confirm how severe my case was. Results from my colonoscopy revealed severe left sided ulcerative colitis from my rectum to the first 25cm of my colon – my doctor had given me minimal information about the disease and prescribed me hydrocortisone rectal enemas to help with the inflammation and said, “see you in 3 weeks.”

“When the emergency room contacted my new gastroenterologist, he told them to discharge me as these were “normal” symptoms of the disease. It was at this point I knew I had to advocate for myself …”

My symptoms progressively got worse with intense abdominal cramping and lack of appetite which led me to my first emergency room visit in August – I was severely dehydrated and was in so much pain. When the emergency room contacted my new gastroenterologist, he told them to discharge me as these were “normal” symptoms of the disease. It was at this point I knew I had to advocate for myself and find a doctor who truly cared and listened to me as I was still suffering.

Fast forward a few weeks into late August – I found myself a new gastroenterologist who came highly recommended and had great bedside manner. When I met with him, he was confident I would be an easy case – treated with mesalamine and multiple supplements. I was excited to start my new medication in hopes to feel better and start living a somewhat normal life…but somehow, I felt even worse. I had no appetite, could not drink water, and could barely get myself out of bed. Just days after getting engaged to the love of my life in early September, I landed myself in hospital for my first inpatient stay due to the disease progressing into pancolitis. It was my first (and worst) flare to date. I was there for four days, was pumped with steroids and pain medication and by the date of discharge was feeling much better…so I thought.

"My body was completely shutting down and it was the most terrifying experience of my life."

Two days later, I woke up with extreme nausea and my heart racing…I woke my fiancé up and ran to the bathroom. I was barely able to get any words out before I fainted on the toilet. The ambulance was called and not long after I found myself back in the hospital being admitted as I was in septic shock. My body was completely shutting down and it was the most terrifying experience of my life. The worst of my flare happened while I was admitted this time around…I was running to the toilet 20-25 times a day and it was just straight blood. I was on a consistent liquid diet and had a hard time even thinking about food. I lost 40 pounds in three weeks.

I developed a rectal abscess from the diarrhea which was draining on its own at first…but then caused even more complications. This led me to the third and final hospitalization when I had to have emergency surgery and ultimately led to my diagnosis of Crohn’s disease. I underwent a procedure called I&D (incision and drainage) of the abscess, but it caused a perianal fistula to form. 33% of people with Crohn's disease develop a fistula at some time, and around 3% of people with ulcerative colitis – given these statistics, my medical team was confident my diagnosis was consistent with Crohn’s disease as it’s much more likely to develop a fistula. Regardless, my treatment plan did not change. I was put on a high dose of prednisone along with Avsola, which is a Remicade biosimilar drug that gets infused intravenously every four weeks. This started in November.

I was homebound and out of work for several months while recovering from surgery. My parents rented a hospital bed for me as my bedroom was upstairs and I had difficulty walking up the stairs post-surgery. I had homecare and physical therapy to gain my strength back along with the help of my mother who became my full-time caretaker. It was (and still is) hard for me to accept how much this disease changed my life in such a short amount of time. It’s changed my life indefinitely, but it hasn’t changed who I am as a person. Through the ups and downs, I still continue to fight every day.

I am still currently on Avsola, but I recently found out I am building antibodies against it. After my first few infusions, I felt like I could run a marathon. Most of my symptoms were gone or very minimal. As time went on, I noticed my symptoms started to come back. My doctor and I are currently exploring the next best biologic option to control my Crohn’s disease symptoms. It’s a frustrating process, but I am confident we will find something that works for me.

My biggest advice for those who have IBD is to connect with others around you, be your own advocate, and listen to your body. Physical health is important but so is mental health. Therapy has helped me tremendously with my diagnosis. I also use social media as an outlet and to spread awareness in hopes that I can help those who don’t know about IBD. IBD is an invisible illness but just because you can’t see it, doesn’t mean it’s not there.

For all my #crohnies and #ibdwarriors, please feel free to connect with me on Instagram! @frannncescaaa 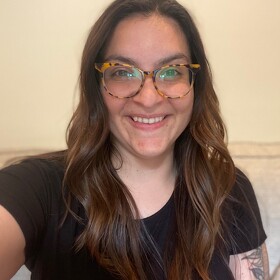 Hi, I'm Francesca. I first started showing symptoms of inflammatory bowel disease (IBD) in March 2021. I was originally diagnosed with ulcerative colitis but following the formation of a fistula I was diagnosed with Crohn's disease. It’s changed my life indefinitely, but it hasn’t changed who I am as a person.