I'm Daanya and I'm 18-years-old. I live in Malaysia. I was diagnosed with Crohn's disease in November 2020. I lived a pretty normal life with IBS till June 2020 where I developed fevers every single night for months and abdominal pain. I had multiple blood tests and even an ultrasound, but no diagnosis was found except my CRP (C-reactive protein) level was at 14 and I was anaemic. I was on various antibiotics which didn’t help at all and all I wanted to do was to give up.

Then on 6 November 2020, I had the worst abdominal pain. My abdomen was so distended and swollen I got myself admitted to a different hospital where they did a gastroscopy and a colonoscopy. My GI (gastroenterologist) found an abscess in my cecum and CT scan showed a leaky appendix, strictures in the terminal ileum and ileocecal valve with local edema. The inflammatory mass had even spread onto my right fallopian tube and onto my pelvis. My CRP level went from 14 to 106.2.

“I thought my life was ruined, especially as a teenager entering college.”

I then had surgery for an ileocaecal resection and had a biopsy. It was confirmed as Crohn's disease. Back then, I had no idea what inflammatory bowel disease was. It took me a while to wrap my head around the fact that this is incurable. I thought my life was ruined, especially as a teenager entering college.

Since then, I have been in remission with mesalazine (Pentasa) as a maintenance drug. However, at the beginning of February 2021, I had a mini flare up so I had another colonoscopy which showed patchy inflammation over the transverse colon to the sigmoid colon and a superficial ulcer in the rectosigmoid junction. This was shocking news as I didn’t have many symptoms such as abdominal pain or bleeding. I was given prednisolone steroids for four weeks. After being on steroids, I felt better and was put on azathioprine (Imuran). After adjusting azathioprine doses twice, I'm finally feeling so much better and hopefully in remission.

IBD definitely took a huge toll on my mental health and body image. My surgery was an open surgery meaning I have a five inch scar running across my abdomen. I can't even look at old pictures of myself thinking about what happened to me. I have not had a single friend my age in school go through what I did. Surgery recovery seemed forever and still today, I remember the pain, pumping myself with morphine and nausea meds. I would never wish this disease upon anyone.

“Without Crohn's disease, I wouldn't be who I am today”

However, without Crohn's disease, I wouldn't be who I am today. I'm in pre-U (pre-university programme) as a science course student who's planning to do a bachelor's degree in biomedical science. I have developed a strong interest in biology and hope to help people with diseases like this in the future. No matter what this disease has caused me, I also wouldn't be writing this without it. So, keep fighting fellow IBDers, all of you are so strong. 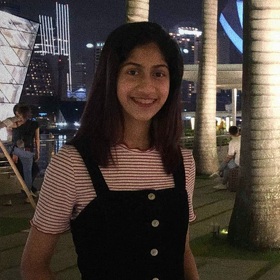 Hi, I'm Daanya and I live in Kuala Lumpur, Malaysia. I was diagnosed with Crohn's disease in 2020 when I was a teenager. I underwent ileocaecal resection surgery in the same year.