My Crohn’s story starts like so many others, with misdiagnosis. It was Christmas 1995, and I was 14. I was rushed into hospital with suspected appendicitis, after days of pain and vomiting and taken straight to theatre. During the surgery they discovered my appendix was fine, but I had a bowel obstruction caused by Crohn’s disease. I had been unwell for a few years before this with diagnoses ranging from stress to IBS and finally an eating disorder. Things just weren’t getting better and I struggled to explain that it wasn’t that I didn’t want to eat - I couldn’t eat.  Food physically would not stay down, and I was in so much pain.  I lost a lot of weight, was falling asleep at 7pm and missing the fun of early teen years. I was just so exhausted all the time.

As I recovered from the emergency surgery, we learnt all we could about Crohn’s and what this meant for my life going forward. Thank goodness for Crohn’s and Colitis UK (CCUK) or NACC as it was known then, and their information sheets. Crohn’s wasn’t so well known back then, and bowel disease wasn’t openly talked about. I started on medication (budesonide and Pentasa) and began the long road to recovery.

I headed off to university in 1999 feeling well. I enjoyed many years of good health, following a low residue diet and experiencing occasional ‘blips’ but am happy to say I enjoyed uni life as much as anyone else! I met my future husband while at university and when I graduated, we moved to London where I started working in media. Unfortunately, I hated it. The media industry just didn’t suit my personality, it triggered my anxiety and I decided to re-train as a nurse. It sounds so clichéd, but I found my calling in nursing. It’s a tough job but one I enjoy, and I feel my experiences with Crohn’s give me compassion and an understanding of patient struggles that make me better at my job. I’m pretty sure it is the amazing nurses I encountered after my diagnosis that led me to this profession.

In 2008 I gave birth to our wonderful son, Ryan. I had a healthy pregnancy but within the first few months of being a mum I became very poorly and ended up in the biggest Crohn’s flare of my life. It is impossible to look after a baby whilst exhausted and spending hours on the toilet in pain. I was relying on my parents to help look after Ryan while my husband was at work and this was a real low point for me. I felt like a failure as a mum. I returned to work after maternity leave, and honestly have no idea how I got through 13 hour shifts in the exhausted malnourished state I was in. It was horrendous. I finally had to admit I was poorly (having taken the route of denial) and started to work my way through every Crohn’s disease medication available; Pentasa, azathioprine, Infliximab, Humira and endless courses of steroids.

Nothing worked. If I could go back and change anything it would be leaving it so long to accept help. I was signed off work for months and had several more surgeries culminating in an end colostomy and proctectomy…affectionately called the ‘barbie bum’ in the IBD community, which I love! I was in hospital several weeks on TPN (total parenteral nutrition) as I was so malnourished, and I missed my boys dreadfully. A stoma was the last thing I had wanted, and I struggled to come to terms with it. My surgeon had formed a loop ileostomy to start with in the hope it could be reversed but my colon was so inflamed, scarred and strictured it never recovered enough, leaving a permanent ostomy the only option.

“Adapting to accommodate your health needs is not a failure, it is not ‘giving in’, it is a sensible move to keep well and achieve your best. I wish I had realised this sooner!”

Adapting to life with an ostomy was hard but it marked a turning point in life and the first steps towards real recovery. I found I could eat better and had more energy to care for my son, who was by this point a toddler full of beans! I went back to work but moved away from ward work, as shift work was exhausting. I found a passion for oncology nursing and worked my way up to a breast cancer nurse specialist. I love this role, it suits my strengths in providing psychological support whilst being less physically demanding, meaning I can give it 100%. Adapting to accommodate your health needs is not a failure, it is not ‘giving in’, it is a sensible move to keep well and achieve your best. I wish I had realised this sooner!

Once I felt recovered, I began to look at ways to improve my body. I felt the Crohn’s disease was still in control. My muscles were weak from surgery and my stamina was non-existent. I decided to take control and made the leap to join a local fitness class. I am shy and suffer crippling social anxiety, so this was a huge undertaking. Luckily, I had stumbled on the most supportive amazing class I could have hoped for. I slowly felt my body getting stronger- and loved it! I signed up for personal training sessions, focusing on strength and core training, and have not looked back since. The physical changes feel great.  I lost weight and gained muscle, but the mental benefits were even more profound. I built self-confidence and started to believe in the capability of my body and trust in myself.  I turn 40 this year (2021) and can honestly say I’m in far better shape than I was in my 20s! There is some anxiety and resistance to strength training with a stoma, but I did my research, invested in a good quality hernia belt and built up the weights slowly and safely. It is possible to do - and the most empowering feeling!

" I honestly don’t think I’d be where I am today without the support of those around me."

Through all this my family has been my rock. It hasn’t been easy for them; I have needed so much love and support along the way and have never been the most compliant patient. They have been so patient with me as I struggled to accept the illness, the stoma, the flares. One of the hardest parts has been coming to terms with not being able to have another child (due to a mix of abdominal adhesions and low ovarian reserves). I honestly don’t think I’d be where I am today without the support of those around me. I have also made some amazing friends who have accepted me for who I am, pushed me to be more outgoing/more sociable and helped me feel comfortable in my own skin. For this I’ll be forever grateful.

I wanted to share my story to inspire those going through tough times to keep on fighting. There have been dark times when I honestly thought I couldn’t keep going but taking it one day at a time, accepting help and utilising an inner strength I never knew I had. I have pushed through to come out the other side stronger. I say this now, even though I am two months into being back on medication for my Crohn’s. Ulcers were seen in a routine scope and I was started on Stelara. Going back on meds was crushing and the anxiety it induced nearly derailed me, but again supported by fantastic family and friends, I am pleased to say I fought my instinct to hide from the problem, accepted the treatment, and can report that it is working well, with very minimal side effects. Crohn’s treatments have come a long way in recent years!

So, what top tips would I give to other Crohn’s patients? Listen to your body. Please don’t ignore symptoms and delay seeking help. If things are caught early, they are easier to treat. If you are offered counselling when facing stoma surgery, please take it. I wasn’t offered any psychological support and I really think it would have made a world of difference. I think this should be a standard part of ostomy preparation to help manage the emotional and psychological impact of such life changing surgery. Finally, I would say however low you feel, however impossible recovery feels, don’t give up. You are stronger than you know. It isn’t easy, you can’t always do it alone but that's ok.

Keep going my fellow IBDers. You’ve got this! 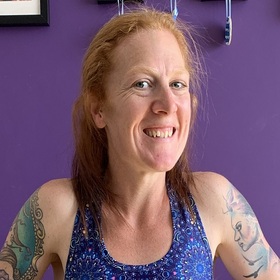 Cassie was diagnosed with Crohn's disease in 1995 when she was 14 years old. After being mis-diagnosed with appendicitis, stress, IBS and an eating disorder, Cassie underwent several surgeries including several small bowel resections, strictureplasty, loop ileostomy (temporary), and end colostomy (permanent) with proctectomy. She is a nurse and mum and has a love for strength training!