I was diagnosed with Crohn’s disease at the age of nine after many months of being unwell. My main symptoms were blood in stools, increase in frequency and severe abdominal pain. I also lost a lot of weight and had multiple visits to the doctors and hospital emergency department. After around six months of these symptoms, I underwent a colonoscopy, and they finally diagnosed me. Due to being so young I wasn’t entirely sure what was going on, but I remember being very scared and upset especially when they started me on steroids and a liquid diet. I used to ask why this was happening to me and tell my parents I wanted to be ‘normal’ like my friends. For years I was on different tablets, steroids and I often couldn’t eat for periods of time in order to get the disease under control, I was also diagnosed with arthritis. I put on lots of weight over my teenage years due to steroids and was visiting the hospital most months, so this was affecting school.

My symptoms progressively got worse over this time and eventually I was started on my first biologic treatment. This was an infusion of infliximab but unfortunately, I had an allergic reaction. Over the next couple of years, I tried many infusions and injections and finally methotrexate started to help. This was a scary time, but I eventually caught a bit of a break and managed to stay on methotrexate injections for around six years. In this time, I was able to live a more normal life like my friends. I was able to enjoy school and my symptoms were more minimal. I was able to finish school and complete college.

When I started university, I began getting more unwell again. I wasn’t sure if this was due to the stress or the university lifestyle, but I was put back on steroids and my injections were changed. I tried multiple different infusions, injections and tablets again. I had gone from having one injection a week to taking multiple tablets a day again. This was hard especially as I was trying to complete university to become a paediatric nurse. I managed to push my way through despite all the hospital visits and qualified after three years to be a nurse.

When I had qualified, I became seriously unwell. I spent almost a month in hospital on really high dose steroids, had multiple tests and eventually went for surgery to have an emergency colectomy, where they removed all of my large bowel and a small part of my small bowel. At the age of 21- years-old this left me with a stoma.

“I was ridiculously scared but finding others who had been through the same really helped me through this.”

I was ridiculously scared but finding others who had been through the same really helped me through this. It meant I could ask questions that the nurses didn’t know the answers to! I then became unwell again and they said that I was starting to show signs of colitis in what was left of my bowel. In the next few years, I had to have a further seven surgeries including a proctectomy, which made my stoma permanent as my disease had progressed so badly. I was still on injections and infusions and had many other complications. My recovery was long, and I missed a lot of work and doing day to day things.

Fast forward five years and I am now thriving as a paediatric sister. I am able to do what I love and have finally stopped taking any injections or infusions. My stoma saved my life and for that I’m thankful. I can now do things that I never dreamed about doing. I’m left with complications and struggle with my mental health due to everything that I have been through but fighting this horrible illness has made me the strong person I am today! My biggest advice for those battling this is to talk to others that have been through the same and just take one day at a time!

When I was recovering from surgery, I wrote a blog for those that were going through the same. You can find this on my Instagram: @semicolon563 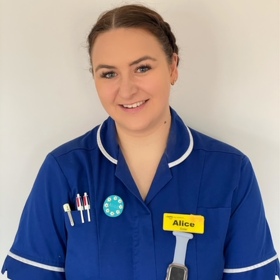 Hi, I'm Alice and I'm a paediatric sister. I was diagnosed with Crohn’s disease at the age of nine after many months of being unwell. At 21, I underwent colectomy surgery and later had a proctectomy, which made my stoma permanent. When I was recovering from surgery, I wrote a blog for those that were going through the same. You can find this on my Instagram: @semicolon563