Symptoms at Diagnosis: None, family history only (did colonoscopy as a preventative measure since Crohn’s runs in the family), symptoms started five months into diagnosis.

I remember waking up from a surgery to repair a rectovaginal fistula in late 2011 and being yelled at by an elderly family member for ruining their lives. Even though I was still in a haze in the recovery room, the tears of pain and anguish washed over me. Whether it was my body violating me with perianal fistulizing Crohn’s disease or family and friends constantly reminding me of how much of a burden I was, the floodgates opened in that moment as I asked that family member to please excuse themselves from the recovery area.

You see, it’s really difficult to live with Crohn’s or ulcerative colitis as it is but in many cultures around the world, there is little to no acceptance of young people who have chronic illnesses. And even though I live in cosmopolitan New York City, I have had one foot in two cultures: the country of my origin, India, and the country of my birth, the United States. According to South Asian culture, I was supposed to be taking care of my widowed mother, not being a burden on her. I was supposed to be out working my Wall Street job and supporting my family, not being a frequent flyer on the IBD floor of my hospital. As the oldest child of the family with no father and no brothers, my role was to take care of my family, not be the person being constantly taken care of.

"How, when and where did my life get derailed from being a straight A student with a stellar career to an unwanted, diseased and utterly “flawed” existence with no meaning in sight?"

And my inability to do so wore on me for over seven years and 20+ surgeries. As if the intersection of a stigmatized bowel disease and being a woman of color didn’t take its own toll, being told no one would want me with my ostomy or fistulae was heartbreaking. Being told “get the j-pouch done; there’s no chance anyone will marry you with an ostomy” was emotionally crippling. How, when and where did my life get derailed from being a straight A student with a stellar career to an unwanted, diseased and utterly “flawed” existence with no meaning in sight?

For years, I contemplated if and when my Crohn’s would quell so I could make a comeback. But in that process, my ambitions had changed. I was no longer a financial compliance executive on Wall Street. Somewhere along my journey of all the suffering and constant chiding from society, I had become a champion of disabled women’s rights. If I had survived all those surgeries, I couldn’t sit back and watch other women like me struggle. I was thirsty for change so I embodied the change I wanted to see in the world.

" ..... shattering the stigma against inflammatory bowel disease, ostomies and fistulae had become a way of life for me."

And that’s when my advocacy work was born. Initially, every time I came out of my IBD closet a tiny bit, I would slam the door shut again and again until I was finally really out. I realized that I couldn’t have one foot in my closeted South Asian world and the other out in the open with my IBD community. And even though it felt initially like social suicide to be out with my diagnosis publicly, my mind had already been made up: it was now all or nothing for me. Why? Because shattering the stigma against inflammatory bowel disease, ostomies and fistulae had become a way of life for me. All the pain and tears I had cried over the years needed a positive outlet, one where I wished no one would be treated the way I had been.

So here I am today”¦ For all the pain and tears IBD has given me, creating awareness for the disease carries a wide gamut of feelings and expressions for me. From sharing my story to allowing me to finally be me, IBD has given me a poise and a joie de vivre I had never known before my diagnosis. It has given me a community of warriors who can lean on each other for support. IBD has given me knowledge (an extraordinary amount of IBD-specific knowledge) and it has given me the freedom to express that knowledge and bridge the gap between doctors and patients as a patient advocate. IBD has taught me that unconditional love, compromise, compassion and kindness do exist. And it has also taught me how to live for each and every moment, all those moments that might make us laugh, dance and cry to savor every single last drop of joy in our lives. Because of IBD, I have been able to step out of my comfort zone and try my hand at something I could have never dreamed of: social activism and disability justice to help to end ableism around the world.

And that’s what IBD awareness means to me. So, own your Crohn’s, own your ostomy, and be proud of whatever we have endured throughout our journeys, for it has molded us into who we are and can make us a better version of ourselves if we let it. 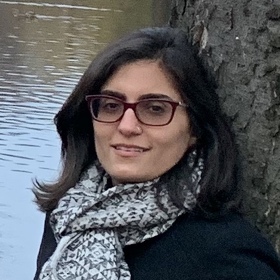 I am a Crohn’s patient who has accumulated several autoimmune ailments over the years. I am an avid blogger, speaker and advocate for chronic illnesses, disabilities and life-saving ostomy surgery.