My IBD journey first began in July 2019, at the age of 15, just before I was due to go off on a once-in-a-lifetime trip to America for the 24th World Scout Jamboree (it really was just before - I was at our local hospital in agonising pain just six hours before I was due to go!). That same morning, off I went to Heathrow Airport with a seven-day course of antibiotics, in too much pain to stand, sit or sleep, and spent the next couple of days in New York having panic attacks, no sleep and crying until there were no tears left, trying my best to put on a brave face for photos.

When I arrived at the campsite the following day, I was rushed to a field hospital on site, in so much pain I couldn’t even stand up, where a doctor drained what he believed to be an infected gland that was the size of a golf ball! I was given another course of antibiotics and spent the rest of my trip feeling so much better, although struggling with urgency.

However, when I returned home, I spent about six months going back and forth to the local hospital, being given course after course of antibiotics and undergoing two operations, with very little clue as to what was going on with me. Things started to get so bad that in October 2019, I was admitted to hospital for a week on IV antibiotics and had my second operation, which I was fortunate to have had a fantastic doctor perform, who knew that something wasn’t right as everything that had been tried before had failed and I was just deteriorating. During this second operation, the on-call surgical team performed a flexible sigmoidoscopy, which showed scarring on the lining of my bowel, suggesting that the abscesses I was being treated for were caused by fistulation.

Following this, I was referred to Addenbrooke’s Hospital in Cambridge, UK, where I was diagnosed with Crohn’s disease following a colonoscopy, and had two setons inserted into my fistula tracts. I was then put on adalimumab injections, which at first I found incredibly difficult due to a severe needle phobia, but after the first injection, I realised they didn’t hurt and have now been self-injecting for a year-and-a-half. At the time of my diagnosis, I had lost about a stone and a half, but very quickly after starting my injections, I became a healthy weight again.

Due to my fear of needles, my IBD team arranged for me to speak to a psychologist, who worked with me to become more comfortable with all things needles, and were incredibly patient with me.

“I gained more control over my fear, they (blood tests) became a lot easier and were soon no big deal for me - this is something I am very proud of myself for!”

Unfortunately, around June 2020, I developed another fistula, so needed another operation for a third seton. Before this could happen, I needed to have an MRI scan, which involved a contrast agent being injected via a cannula. I was also put on azathioprine tablets, which, to start off with, meant I needed weekly blood tests. It goes without saying that the first couple of times I went for the blood tests, I found it quite difficult due to my needle phobia. However, as time went on and I gained more control over my fear, they became a lot easier and were soon no big deal for me - this is something I am very proud of myself for!

Later on in 2020, I was referred to St Mark’s Hospital, London, to discuss potential treatments to heal my fistulas, following which I underwent my first FiLaC (fistula-tract laser closure) procedure in February 2021, which successfully healed my third fistula, and then my second in May 2021, so I am now living seton-free! However, unfortunately now, nearly three months post-op, my first and second fistulas have not healed, so I will have to wait to see what the future has in store for me.

“While my Crohn’s has got in the way of life sometimes and causes me daily pain, it has also given me so many things to be proud of”

Despite the challenges Crohn’s has brought and missing a lot of school, I am pleased to be able to say that I successfully achieved all 10 of my GCSEs and am now going into my final year of A-level studies, and while my Crohn’s has got in the way of life sometimes and causes me daily pain, it has also given me so many things to be proud of and my friends and family have been so supportive. 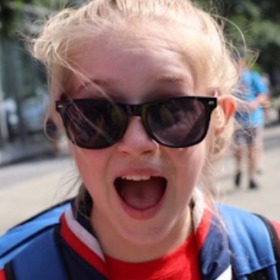 Katherine was diagnosed with Crohn's disease in January 2020, aged 15 years old. She has undergone several procedures to treat fistulas and has overcome a needle phobia all whilst completing and passing her GCSE exams.