Symptoms at Diagnosis: 8 months of pain, diarrhoea and exhaustion

We've asked some of our supporters to try out probiotics and keep a diary for us. Colin has been trialling VSL#3 for a month. Here's his diary...

The Crohn’s started in my large intestine and ileum, but I now also have extra-intestinal symptoms with my joints, eyes and hearing. The damage to my hearing means I am now ‘wired for sound’ with hearing aids in both ears due to high frequency hearing loss that has rapidly deteriorated in the past year. I use ‘artificial tears’ almost every day as I have dry and itchy eyes despite the use of anti-histamine tablets. I normally start with the artificial tears, if the itching continues I use anti-histamine eye drops as well. Generally, I only need the artificial tears when taking the anti-histamine tablets. I have had problems with both shoulders and elbows such as reduced range of movement, swelling and pain, but this has now moved to both wrists/hands. I have tried amitriptyline, gabapentin, pregabalin, tramadol and Oramorph for the pain, but now use Butrans and Lidocaine and put up with the breakthrough pain as the side effects of the other medications are too much to take on top of everything else.

The continual pain despite Butrans patches and lidocaine plasters is really wearing me down and I think I may be depressed, as I am having some dark thoughts, mood swings and lack of enthusiasm to do almost anything. After nearly two years of multiple investigations and tests, there are no answers/reasons for my wrist/hand pain and I am left with the pain clinic route to manage the pain. With no diagnosis, or prognosis, for the pain, I feel as though I must be imagining the pain and loss of sensation. I have been taking Budesonide for my Crohn’s flare, tried Methotrexate injections (5 weeks) and now moved on to Humira (2x40mg pens every 2 weeks) to try and get it under control, but still suffer flare symptoms without much improvement.

I suffer bacterial overgrowth due to intestinal scarring, which exacerbates the diarrhoea urgency, frequency and gas and have taken prophylactic Metronidazole anti-biotics once every four weeks.

As I am the point of becoming fed up with medication side effects, I am happy to give probiotics a try. If they colonise my bowel so the bad bacteria can’t grow, and use up any energy/food that bad bacteria would feed on, I am hoping my diarrhoea will improve massively. I have an open mind so would say that I am hopeful they will work, as we are all individuals and one person’s cure is another person’s ‘poison’!

I had to wait to start the probiotics after being put on Metronidazole to clear up bacterial overgrowth. The week's course of antibiotics finished last week, so I am now at day two of taking the probiotics (started Monday 6th June).

Suppose it’s early days at the moment. Before my antibiotics I was having 5-10 toilet trips each day, but following the antibiotics, it’s dropped to 2-4 times a day, as normally happens when I initially come off antibiotic treatment. I’m hoping that the probiotics will keep things settled, whereas I normally start to increase toilet trips each day after finishing antibiotics until I’m back up to 5-10 trips a day, usually after 2-3 weeks.

The antibiotics treatment I’m on is a prophylactic treatment, and I take a one week course at the start of each month. I discussed it with my consultant after noticing the improvement in bowel frequency/urgency after having antibiotics for throat/ear infections, etc. We tried a number of different ones until we found one I could tolerate and that he was happy for me to have long-term. My only concern was the side-effect “nerve damage” with prolonged use, especially as I have extreme nerve pain in both hands/wrists that means I have to take a lot of pain relief. We tried stopping the antibiotics for two years and, if anything, the nerve/joint pain has slowly got worse, so it appears to be a degenerative change that probably won’t improve.

The VSL#3 probiotics are easy enough to take, mix the powder into a glass of squash and drink it. Only capsules would be easier. At least using the powder means I have to take in a bit more fluid, which is always a good thing during a Crohn’s flare. Hopefully they mean I can cross a medication off my list, but does mean I have something else to take every day instead.

Not sure if the Humira treatment is working, I’m on 2x40mg injections every two weeks. My bloods look the same as before I started, other than a slight anaemia and elevated LFTs, which seems normal for me. My IBD nurse was supposed to be sending me a faecal calprotectin test, but as nothing has arrived, I’ll be speaking with my GP tomorrow. Hopefully next week I’ll know if the Humira will continue or not.

Might be too early to be certain, but my bowel habits are still at the lower end of normal (2-5 times a day). This seems to be an improvement, as by now I’d be heading back towards 5-10 times a day. I am obviously keeping my fingers crossed, as if this remains until the end of the month it will be a definite big improvement to my normal antibiotic regime followed by a drop and steady increase in loo trips. I was hoping to lose some of the bloating after eating, but that is still remaining to be an issue. Maybe it will decrease as I get further into the course of probiotics. If I can replace antibiotics with probiotics I will be happy.

I had to miss a couple of days (13 and 14 June) as my Humira headache was making me nauseous and my nausea medication wasn’t working, so I couldn’t face gulping down 250ml of fluids. Generally mixing the VSL#3 probiotics with some peach barley squash makes it very pleasant to take.

Humira treatment is now elevating blood sugars as well as causing three day migraines. At least I don’t seem to be having any issues with the probiotics!

The only issue with probiotics is likely to be long-term cost, as the VSL#3 looks to be around £50 for a month’s supply. I have a pre-payment prescription card so am limited to around £10 a month for meds and could probably ill afford the additional cost. However, if it reduces my symptoms, then I would say the additional cost would be justified. Roll on Day 30!

Bowel habits are still much improved and at the lower end of normal. By now I would be looking forward to taking my next week’s course of antibiotics to treat bacterial overgrowth and the dreaded explosive diarrhoea that comes with it. I can’t believe that instead of being stuck in the loo more than 10 times a day, I might now only be in there once or twice in a day. The other thing I’ve noticed is that I’m also not having to take Buscopan for cramping pains since the first week of the probiotics. I do still suffer with nausea, but I find taking my meds before breakfast, then the probiotic after breakfast is the least nauseous method. The bloating seems to be about the same after eating, but I’m happy to not be stuck in the toilet so much without having to take more medications.

The Humira treatment I’m on seems to alternate between anaemia and high blood glucose levels, so I am having the odd day where I don’t take the probiotic, especially if I’m feeling particularly rough. This is mainly every two weeks, for 2-3 days when I have the migraine, otherwise I’m finding the powder mixed in fruit squash is ok to take. I think I’d prefer capsules, as I could take them every day, it’s only drinking the mix isn’t palatable with a migraine!

I suppose the proof will be when the probiotic course is finished, as to how quickly things descend back into chaos. On the other hand, it could also be that the Humira is starting to get the Crohn’s flare under control as well.

I still feel cost will be the main factor if I were to continue the probiotics long-term, unless it is possible to be prescribed them as VSL#3 is available on prescription for some people.

Things have started to change towards my usual need for antibiotics, but nowhere near as severe as normal. I am going to try delaying the antibiotics by a week and see how it goes ‐ I’ve had enough of stuffing tablets into my body and would prefer a more holistic/natural approach.

I’ve ended up with Sumitriptan for the migraines I get from the Humira and hate the fact that I end up needing more meds for the side effects from the ones I need for the Crohn’s. It’s a vicious circle!

What can I say ‐ July 22 and I’ve not had to take antibiotics for bacterial overgrowth. Hopefully this will be a permanent thing, once I’ve spoken to my consultant about getting probiotics on prescription. This is a definite improvement in symptoms.

The only thing that may also be having an impact is having the 80mg Humira every two weeks combined with 9mg Budesonide every day. Although, my last FC (faecal calprotectin) test was over 500, so there is still a lot of inflammation going on, even though my blood inflammation markers (ESR, CRP) are normal.

Taking the VSL#3 has been fairly easy, the only thing to make it even better would be if it were in capsule form.

On a positive note, as I’m not taking the antibiotics, I’ve decided to give Weight Watchers a try. Once I’d hit 13 stone I decided that was high enough, and now four days later, I’ve already dropped 3lb in weight, so looking forward to hitting my target of 11st 7lb. When I get the bacterial overgrowth issues and have to take antibiotics, I find it near impossible to control my eating, mainly due to the fact that I spend so much time in the loo and feel even more exhausted than usual. Having the probiotics has improved things with the fatigue, still not brilliant, but improved.

Now all I need is to get over the Humira induced anaemia and blood sugar spikes and I will start to feel more like I used to.

Thanks for including me in the trial. I must admit to being a bit of a sceptic originally, but now see that they can have big benefits, as long as they make it through the digestive system to the bowel intact.

*Colin was provided with a free month course of VSL#3 by Ferring Pharmaceuticals in return for his honest opinion about the product.

You can buy VSL#3 probiotic here*

*This is an affiliate link 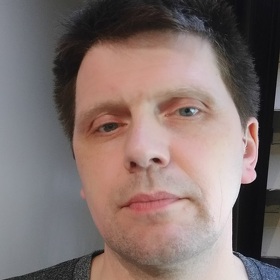 I have Crohn's disease - ileocolitis.