My diagnosis of ulcerative colitis (UC) was super quick! My disease progressed rapidly, so after two weeks of symptoms getting worse at home, I went to A&E. I was diagnosed that day, following a colonoscopy, and admitted for IV hydrocortisone. I had emergency surgery to remove my colon less than a week later.

So, there I was, faced with the stoma, that I had never even heard of seven days earlier, thanks to a disease that I hadn’t heard of seven days earlier either. I was only 19, so my confidence took a massive hit. I had to be re-opened and cleaned out for sepsis 4 days after the initial surgery. I stayed in the hospital for a total of six weeks, and by the time I left I could barely walk due to muscle loss and I weighed in at a grand 6 stone 2 lbs.

The recovery felt long and hard, and after about four months, I returned to work. I was counting down the days until I could have my stoma reversed. The stoma nurse had promised me that I could have a J-pouch built, which would ultimately mean that my intestine could go back inside my abdomen where it belonged! A J-pouch is basically a replacement rectum, which is built from your own small intestine, and serves as storage for your faeces before you evacuate, much like a normal person’s rectum does for them.

When I had my first follow up with the surgeon, my first question had been: “When can you build me a J-pouch?”

He said that once my health had improved a little more, he could book me in. He then went on to tell me about the fertility issues that having a J-pouch built could have.

I left that appointment feeling like my world had just been turned upside down. Not having children had never been something I had considered a possibility, and I didn’t want that to be how my life turned out. I also didn’t want to live with the stoma because it had been a nightmare since day one! I had constant leaks and burnt skin. I no longer wanted to leave the house anymore because I’d had a few leaks when out and about, and found it all pretty traumatising.

I made the decision to try for a family before having the J-pouch built, because not being able to conceive felt like too big of a risk. I did get pregnant, and then I lost it, and that was an experience I didn’t want to repeat either. My head was a mess, and I was miserable feeling housebound, so I booked the surgery.

I had my J-pouch built and had post-op ileus again, where my digestive system went into complete shutdown, just like I’d had following the first one. I was in hospital for about 10 days, then I went home to do the slow recovery again.

I had a pouchitis and cuffitis flare before my pouch had even been connected, so I used foam steroid enemas to treat it. A contrast enema x-ray confirmed that the pouch had healed and had no leaks, so the reversal was booked in.

A year after it had been built, it was connected up. Surgery went smoothly and I went home the following day. The day after that, I had to go back in because my intestine had continued to swell, so anything I ate caused severe pain and vomiting. I sat in the hospital for a week, nil by mouth, sporting a NG tube, feeling very sorry for myself. When I was finally discharged again, I felt like I could now finally begin my “normal” life again ‐ bag free and happy!

I didn’t have many months of good health between recovering and having my first Pouchitis flare. I tried the usual route of antibiotics and VSL#3 to no avail. Prednisone got me in remission a couple of times, but I never stayed there long. I reached a point where I couldn’t even fully wean off the steroids before the symptoms re-emerged, so I started Azathioprine.

"I began fundraising, posting regularly and eventually found myself fully emerged in the online IBD and ostomy community. I loved it!"

It was around this time that I started raising awareness of IBD online. My job in social media marketing meant I knew my way around the different platforms, so that was a good start. I began fundraising, posting regularly and eventually found myself fully emerged in the online IBD and ostomy community. I loved it! It also led to me winning a Pride of Britain ‐ fundraiser of the year award too, in 2015.

I had a 10-month remission with Azathioprine before going into another flare. I tried enemas, suppositories and budesonide which had no effect. I was told I could start Infliximab after I had a pouchoscopy to confirm active disease, but during that pouchoscopy a stricture was identified. My IBD nurse said that I needed to consider having my J-pouch removed, which I point-blank refused to do. I asked for a second opinion and was referred to a hospital a little further away. The IBD nurse believed they may be able to dilate the stricture.

I was pretty annoyed at this point because I had reported the lower, left sided abdominal pain over and over during the 19 months prior, and nobody had investigated it, and so I’d been living on a lot of painkillers. I was relieved that the source of the pain had been identified, but angry that it had been discovered by accident. I’d even started vomiting, and the IBD nurse had blamed the painkillers!

I saw my new consultant who organised a barium enema x-ray to have a proper look at what was going on inside my abdomen. He told me that he would call me the week after on the Tuesday to discuss the results and the plan going forward for the dilation. I had gone on my merry way, confident that the dilation would be my fix, and then I could finally start the Infliximab and be better.

The surgeon called me on the Monday:

“I know you were waiting to find out if it was possible to dilate your strictures, and the answer is no. I would like to book you in as an emergency for surgery next week.”

I was gobsmacked. I hadn’t even considered surgery an option. Probably because I didn’t want to. He told me that there were two strictures, one short and one right next to it which was long. He also said he couldn’t understand how I was even standing upright. I asked if I would have a stoma and if it would be permanent, and he told me that I may wake up with a stoma, but he couldn’t say for definite either way, but it should only be temporary.

If I hadn’t “met” the inspiring ostomates online, I wouldn’t have been able to deal with this news. I’d had the mindset that I would rather die than have a stoma again, but the people online had been so positive. They were grateful that they could live their life!

I was admitted the day before the surgery for the pre-op assessment. I woke up from surgery and the first thing I did was feel for a bag ‐ nothing! Then I remembered he had said that it may be on the other side, and it was! I felt sick, and even in my post-op daze, I was panicking and asking a nurse if she knew if my stoma was permanent. Of course, I had post-op ileus and an NG tube.

I recovered well and was astonished at how different this stoma was. I had thought that they were all the same and I would be dealing with constant leaks again, but no, it was amazing. I was living life with no painkiller haze and no pain. It was incredible, and it was the first time I’d been happy in a long time! I did consider not having it reversed, but ultimately decided that I may as well go for it and see what happened. At least I knew now that if I did need a permanent stoma, I would be OK!

I had it reversed and had a short time pain free. When pouchitis flared again, I had to go through all of the medication options that I had tried before, as it was being treated as though it was a new J-pouch. All medications failed as they had done before, and I reached the stage I had been at before the surgery ‐ Infliximab. Infliximab didn’t help either, and I had looked at a clinical trial for pouchitis, which I eventually decided wasn’t worth the hassle, so I was referred back to the surgeon that had done my last two surgeries for a J-pouch excision. I was so tired. I felt like my life had been on pause for so long because of the pouchitis and the fatigue, and I just wanted to be able to live it. I didn’t find the decision easy by any means. A bag for life was a scary prospect. FOR LIFE, as in FOREVER! I began to research solutions for all of the issues I had experienced with my previous ileostomies, and I ordered bag samples and asked the online community questions. My fears soon settled, and I was excited to get the surgery done and over with, so I could un-pause my life.

Best decision I ever made. Hindsight is a wonderful thing isn’t it? If I hadn’t had the reversal last time, I could have been living instead of just existing for the three years I was struggling. All of the things I haven’t been able to do for so long, I can now do. I haven’t found anything that my stoma stops me doing yet, other than drinking carbonated drinks (small price to pay). Yes, fatigue and joint pain are still an ongoing problem, but I feel much more mentally equipped to cope with those now.

"IBD gave me a purpose, and opportunity to help other people, and for that, I will always be grateful."

We often focus on what IBD stops us from doing. I frequently see people feeling down because they’re unable to work or continue with their education etc. I’ve felt it myself during flares, but, when I look back at my journey, I think IBD has definitely changed my life for the better in many ways. When I was diagnosed, I drank too much, smoked too much and I was in a bad relationship. IBD made me re-evaluate the things and the people that mattered. It made me consider how I treat my body and helped me learn to listen to it so I can care for it better.

The opportunities that have come my way because I have IBD have meant I have ended up where I am today, and I am happy here! I run the #IBDSuperHeroes awareness campaign and Facebook group, sit on the board for UK charity Cure Crohn’s Colitis and work with healthcare companies as an IBD Patient Expert. The blogging, which I started mainly as an outlet for myself, has led to me writing for InflammatoryBowelDisease.net and Fittleworth Medical. I don’t think I had any goals before my diagnosis, and I didn’t feel like I had a purpose. IBD gave me a purpose, and opportunity to help other people, and for that, I will always be grateful. 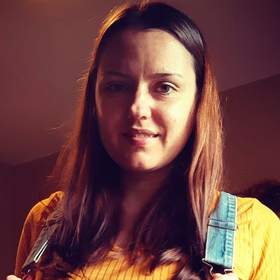 Hi, I'm Sahara. I was diagnosed with ulcerative colitis in 2007. I run the #IBDSuperHeroes awareness campaign and Facebook group, sit on the board for UK charity Cure Crohn’s Colitis and work with healthcare companies as an IBD Patient Expert.