I started out with standard bug symptoms at the end of February 2018 -  like stomach cramps, feeling run down and running to the loo. I just thought it was a bug and would go away on its own.
I have had bouts of diarrhoea before and they have cleared up so thought nothing of it until a week-and-half later and it was still happening. It would be every time I had eaten I would feel the need to go to the loo. I visited the doctor and he thought it was a bug too and explained it should go away on its own.
Three days later the symptoms became a lot more severe. I was passing blood every time I went and I had started to throw up after I had eaten. I was left in so much pain I felt like I couldn’t eat or drink.
I visited the doctor again and he asked for more stool samples. Still convinced it was a bug, I left without any medication.

The next day I found out I was pregnant. I had been trying for months and I was so chuffed. I assumed (very wrongly) that my symptoms were just really bad morning sickness. Silly I know!

That night I passed more blood than I ever had done so now I was scared. I had never had this before and decided I wanted a second opinion.

I went to the walk-in centre as soon as it opened. My partner had to book me in as now I couldn’t move at all because I was in so much pain. The cramps were worse than labour.

The nurse I saw was absolutely lovely. Couldn’t do enough for me and wouldn't let me leave until I was admitted to hospital. I was with her for two hours!

I'm so glad she got me admitted as within a week of being there, after many tests and scans, I had been diagnosed with ulcerative colitis. Finally I had an answer as to why I felt so poorly.
I knew about colitis but only very little. I knew that it can be controlled by medication so I started treatment. I had an infusion of infliximab, and took Asacol and steroids. I still don’t know much about these medications as in the hospital I was just out of it. I was asleep most of the time and when I was awake I was zoned out. I couldn’t concentrate on anything.
While taking the meds, I was having scans to see how the inflammation was doing and if it was reducing. But it wasn’t. In fact I was becoming more inflamed and it was obvious I wasn’t responding to the medication. This meant I had to have stoma surgery. I had my colon removed and a temporary ileostomy constructed.
I was very naive. I know I was told about the stoma surgery but I thought they’ll go in and they’ll see everything is fine and I won’t need a stoma.
But it happened. A few days later when I came round properly I realised I had it. I didn’t want to look at it. I didn’t want to change my bag, I even refused to read the books as I didn’t want to know. I thought my family and friends wouldn’t want to know me anymore and it had turned my world upside down.
I didn’t let anyone visit me in hospital other than my partner and my immediate family. I felt so ashamed. I needn’t have worried though. My friends were supportive. They all wanted to see it haha! And my boys were very interested in it too.
It took a while but I realised that my stoma saved my life. If the surgery was any later, even by an hour, my colon would have burst on its own which would have led to peritonitis and sepsis. My diagnosis changed to Crohn’s colitis which made my stoma permanent. This helped to accept it too. I have my ‘bagforlife’ and I embrace it.
My recovery took a while as I had lost a lot of weight and I couldn’t walk without help. I couldn’t eat on my own and unfortunately, but not surprisingly, I lost my baby.
After leaving hospital, I started to lose my hair. I think a culmination of medication, malnutrition and losing my baby, my hair just wasn’t healthy.
It was heartbreaking watching it fall out every morning so I took control and shaved it off for charity! It was falling out anyway so I decided to shave it to raise awareness and money for Crohn’s and Colitis UK and raised over £2000.
Six months on, I’m back to nearly full health, have become a stoma pro and my hair is growing really fast. I still have a few wigs though which I wear for parties or nights out.
Having a stoma hasn’t stopped me doing anything I would have done normally, it’s just helped me live a lot healthier than I was.
Looking back I have probably had Crohn’s for years but never realised and always put it down to other things.
By telling my story I hope people will recognise the symptoms and hope it will get more people talking about Crohn’s disease and ulcerative colitis. The symptoms can come out of nowhere, take on the form of normal bug type symptoms and deteriorate so fast it’s scary. 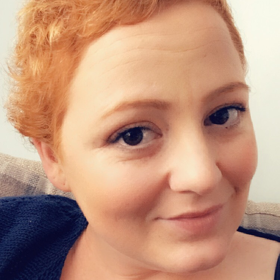