A colectomy removes all or part of your large intestine (colon) and an ileostomy (a type of stoma) is then formed using the end of your small intestine. A stoma is an opening in your abdomen which is surgically created. It diverts faeces into a bag attached to the opening.

What forms of IBD is colectomy with ileostomy surgery used to treat?

All types of ulcerative colitis and Crohn’s disease affecting the large intestine (colon) - Crohn’s (granulomatous) colitis and ileocolitis. In ulcerative colitis patients this surgery is often done in an emergency situation as it leaves the option to have any remaining colon or the small intestine connected to the anus or rectum at at later date.

Why is colectomy with ileostomy surgery needed for IBD?

If your inflammatory bowel disease (IBD) is not responding to other treatments and you have severe inflammation or damage to all, or part, of your large intestine (colon) then you may decide to have a colectomy.

If it is not possible to reattach your intestinal tract back together so that you can pass stools ‘normally’ then you may be given an ileostomy. In an ileostomy the end of the small intestine (ileum) is brought out of the abdomen and stitched onto the skin to form a stoma. The other stoma type which can be formed following a colectomy is a colostomy. This is made using any remaining large colon that is still attached to your small intestine.

Body waste then passes through the stoma and is collected in a bag. The stoma can be permanent or temporary. In some patients it is possible to later reconnect the small or large intestine to the anus or rectum (removing the need for the stoma).

How is colectomy with ileostomy surgery done?

Shortly before your surgery your blood pressure and breathing will be monitored and you will be prepared for theatre. You may be given medicine through a vein in your arm. Just before the surgery you will be given a general anesthetic which will put you in a sleep-like state so that you won’t be aware of what’s happening.

Colectomy surgery can be carried out either through open surgery or laparoscopic (keyhole) surgery. The type of surgery you receive will depend on your circumstances and the surgeon you have. It should be discussed with you prior to your operation.

Open surgery: An incision will be made along your abdomen to provide access to the colon for your surgeon. They will then identify the damaged section of the colon and remove it.

Laparoscopic surgery: Several small incisions (or ports) are made in the abdomen. A small camera is inserted through one of the ports to direct the surgeon to the colon. Surgical instruments are inserted through the other incisions and the damaged colon is pulled through one of the ports and operated on externally, before being reinserted. This type of surgery is meant to result in a quicker recovery time for the patient and also less scarring. In some cases the surgeon will discover during surgery that they need to convert to open surgery due to unforeseen circumstances.

Once the damaged colon has been removed the surgeon creates the ileostomy. The end of ileum (the end of the small intestine) is divided and brought outside of the abdomen through a small incision. It is stitched onto the skin to create the stoma. As these stitches dissolve the stoma will heal onto the skin.

The stoma will usually be created on the right-hand side of your body, but the exact location will be discussed with you before your surgery and if you have any preferences about the location these will be taken into account.

How the surgeon closes the incision/s in your abdomen depends on whether you received open or laparoscopic surgery. The wound in open surgery is often large and runs down the middle of the abdomen. In general this will be closed using clips which will then need to be removed around 10 days after surgery. The wounds in laparoscopic surgery are much smaller and often a special type of glue is used to fix them back together. This glue dries and falls off naturally. In both cases stitches may also be used - these can be dissolvable or may need removing around 10 days after surgery. 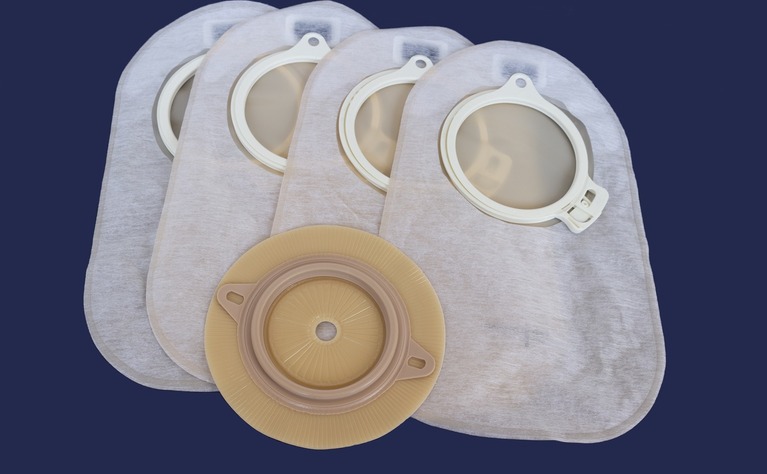 Recovering from colectomy with ileostomy surgery

After your surgery you may need to stay in hospital for a week or two until you have recovered enough to return home. The length of your stay will also depend on whether you had open or laparoscopic surgery.

You may receive nutrition through an intravenous drip until your bowel has healed a little and you are able to drink more normally. You will probably be encouraged to eat and drink as soon as you feel able and will be encouraged to move around.

Your stoma will be covered with a bag to collect stools and the stoma may appear very large at first. Don’t be alarmed as this is due to swelling following the surgery. It can take around eight weeks for it to reduce to its final size after the operation. An ostomy nurse will visit you to teach you how to care for your stoma and answer any questions.

Your abdomen will probably be sore and you may find that you suffer from excessive gas and the discharge from your stoma is unpredictable. This should all improve as you recover.

It will probably take several weeks after leaving hospital for you to begin to feel better. You will probably be advised against any heavy lifting or strenuous physical activity for several months and you may not be able to drive for a couple of weeks.

You may be recommended to follow a certain diet, or avoid certain foods, in the weeks immediately after surgery to aid healing.

There are risks associated with any abdominal operation and you should discuss the risks specific to you with your surgeon before the operation. Some of the complications which can occur include:

Things to know about colectomy with ileostomy surgery