Living with inflammatory bowel disease (IBD) is a rollercoaster of a journey, right from those early days when you have no idea what is going on, through to accepting and adjusting to life with IBD, and moving on to achieve your dreams and aspirations. My journey started at the age of 12, when I began to suffer with abdominal pains and the usual ‘toilet problems’!

Unfortunately, it took over two years for me to be diagnosed with Crohn’s disease ‐ even the gastroenterologist was completely shocked to find this. I was not your typical patient ‐ I had not lost weight, there were no vast changes of inflammation in my blood (such as the C-reactive protein [CRP] test that is often used), and I had no family history of IBD.

However, I have suffered with juvenile arthritis and fibromyalgia from the age of three, and so my blood inflammation was already sky high, and the arthritis was mostly treated with steroids, so I already had the moon face, and weight gain associated with the medication. I remember fighting, and fighting for answers, being told it was ‘just constipation’.

When the camera investigations were done, I vividly remember the consultant coming into the room, sitting on the bed, and saying the exact words, "I am so, so, sorry Simon. I never realised how bad you really were". The entire gastrointestinal tract was affected, and ulcerated, from the esophagus right through to the other end! Treatment began the same day, with Mesalazine and Omeprazole, and I was delighted to find out that I would be on a ‘no food’ diet for eight weeks! Say hello to the polymeric diet ‐ now that’s an experience that I’d rather not try again, and I think it put me off milk for life!

Given home schooling for 3 months

Two years previously I got 16 GCSEs

Started at University of Manchester

Graduated from university with a 1st

I remember the first night I spent in hospital after being diagnosed ‐ I was sat in a side ward cubicle, alone, in the dark, and I remember sitting in bed, crying and asking ‘why me’ ‐ why am I so unlucky to not only have to deal with the challenges that arthritis had presented in the previous 11 years, but also the thought of living with Crohn’s disease? I was petrified I would need a colostomy bag; it was one of the thoughts that I could just not get out of my head, I’d never met another person with Crohn’s, or in fact heard of it before hand. I felt completely isolated.

Over the coming weeks, I began to adjust to Crohn’s ‐ I wasn’t actually any different now than I had been over the last year. The only difference now was that I knew what was wrong with me. It wasn’t ‘all in my head’, as a few people had suggested over the previous two years. As I was diagnosed in April, my SAT tests in year 9 were looming, and so I tried going into school shortly after diagnosis, to see if I was strong enough.

I found it challenging ‐ emotionally and physically. Sitting with people eating and drinking normally was just a torment in itself, but trying to do everything my friends were doing was just too much, and so the school arranged from home tutoring, via the local authority, for a period of three months. These weeks out of the school environment allowed me to build up my energy, readjust to eating normally after the polymeric diet, and build up confidence again to face the world.

My next worry, and challenge, was coping with Crohn’s disease whilst studying for my GCSEs and A-Levels. I had noticed that my symptoms worsened when I was stressed, and this made me even more anxious just thinking about getting stressed ‐ it really is a vicious cycle. At times, I questioned whether it was worth putting myself under all of this pressure, to achieve the grades I wanted. I was never happy with anything below a B, which didn’t help the situation! In hindsight, I’m so glad that I stuck with it all, gaining 16 GCSEs and 3 A-Levels, before starting my undergraduate degree at The University of Manchester in Biomedical Sciences in 2012.

As part of my degree, I spent a year working in a medical communications company. This was my first experience of working full-time, in an office environment, and while I was excited for the new opportunities I would experience, I was also anxious about how I would cope in working full-time and managing my health. Luckily, my employers were fantastic, and were extremely flexible. I was able to work at home when I wanted and needed to, and I could move my working hours around my personal needs.
After a year of working I returned to university to complete the final year of my degree and, in 2016, I graduated with a first class honours degree! While I loved so many aspects of my degree, the amount of stress I was under was incredible, particularly around exam time. The stress unfortunately did impact on my health and without the support that I had this would have undoubtedly have been much worse. This is why I cannot emphasise enough about the importance of ensuring that the right support is in place at university from the earliest opportunity, in order to eliminate as much unnecessary stress as you can. We must all speak up for ourselves, to ensure that we are supported in the way that we should be. I know it is easier said than done, but it really will pay off in the long run.

Towards the end of my degree, an exciting opportunity came about, which I decided to apply for. Following an application and interview, I was successful, and officially started a PhD in October 2016 at the University of Leeds. Some people say I’m crazy for doing a PhD, and sometimes I often feel a little mad for deciding to do one! But I have the attitude that if opportunities like this come along we should grab them with both hands, stepping out of our comfort zones to do something new in life.
The topic of my PhD thesis is one very close to my heart and keeps me motivated to carry on, even when it seems difficult to do so. I am specifically looking at helping children with arthritis to self-manage their condition in partnership with their families, healthcare professionals and teachers. My hope is that by the end of the PhD, I will have developed a new way of thinking about how we should best support young people to ensure that they, and their families, have a voice in all aspects of their care.

There have been challenges and days when I wished that I didn’t have Crohn’s, but you certainly come through the other end, feeling stronger and even more motivated to achieve your goals. Who knows what the future will bring, but I live for today and dream for tomorrow ‐ it’s the best way to be. 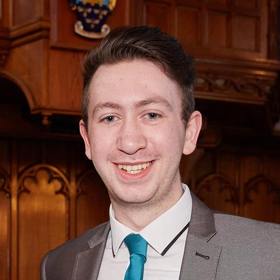 My Crohn's disease symptoms started in 2008 when I was 12 and was diagnosed two years later. I also have IBS, juvenile idiopathic arthritis, psoriatic arthritis and fibromyalgia.