Impact of IBD on physical and emotional health: Findings from an IBDrelief survey

The findings of an IBDrelief survey have revealed the huge impact inflammatory bowel disease (IBD) and its associated symptoms have on the lives of people with the disease.

The survey, developed in partnership with, and funded by, Janssen-Cilag Limited, asked people with IBD (which includes Crohn’s disease and ulcerative colitis) about the emotional and mental impact the disease has on them.

The report setting out the findings reveals key insights in five areas - the impact of symptoms, the impact on people’s lives and future plans, the emotional impact, support received and the impact of the COVID-19 pandemic.

The key findings are set out below. You can download a full copy of the report by clicking on the button below.

“ You have to cope with sometimes drastic changes in your life – breakdown of relationships, losing a job and the social side of having a job, finding out you probably won’t have children. ”

Impact of IBD on lives and future plans

IBD can have a large impact on the daily living and future plans of those living with the illness. Of our 167 respondents:

Abilty to leave the home

Symptoms can have a huge impact on the lives of people with IBD, particularly during a flare. Of our 167 respondents:

“ I would like more education about chronic fatigue. I have had times where I’ve been physically too tired to respond to a text message; the fatigue is unreal. ”
7in10

IBD can have a large, often overlooked emotional impact on people living with the illness. Of our 167 respondents:

People with IBD may need support for more than just symptoms from their IBD team and outside the clinic. Of our 167 respondents:

1/4 have discussed emotional wellbeing with their IBD teams

“ Every time I’ve been in clinic, it’s 5-10 mins tops, and it’s all about IBD symptoms – nothing else like how you are mentally or emotionally. It’s like they just care about the IBD side and forget that living with this illness causes mental and emotional problems to the patients too. ” 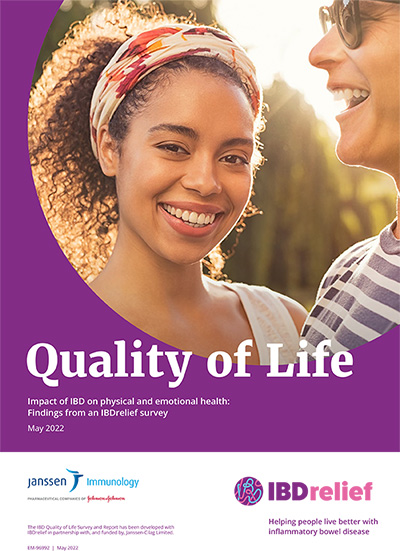 The IBD Quality of Life Survey and Report has been developed in partnership with, and funded by, Janssen-Cilag Limited. EM-99379. May 2022

2Includes respondents who feel embarrassed by their condition sometimes (28%), frequently (28%) and daily (14%).

Get IBD info delivered to your inbox